We are doing well! We arrived in Paris, Monday night around 8:30pm. We lost an hour on the flight over from Dublin. We grabbed our bags and headed for the metro. Thankfully we had very good directions printed out for where we were going. We are renting a 2 bedroom apartment that we found on airbnb.com. It turned out to be a good choice, much cheaper, although off the beaten path a bit, but the metro station was not far. Most people in Paris speak english, except for the first lady we encountered upon arrival. She was working the metro ticket booth, and we wanted to find out a price for day passes since we were here for 2 days. I stumbled through a conversation with her and we were on our way. Other than that most people when asked if they speak English say yes, although we have had some funny looks…one from a guy when I asked for tap water (that’s what they called it in Ireland)..apparently in Paris it’s “still water”.

This morning we left our apartment around 8 and headed to the Basilique du Sacré-Cœur one of the beautiful cathedrals in Paris. It is high up on the hill and we got a great view of the city below. Then we headed to the Opéra national de Paris. This is also known as the Paris Opera House. It’s a beautiful building, built over 14 years and a large amount of money. We took a guided tour and it was well worth the money. Unfortunately while we were there I tripped on a step and rolled my right ankle, which didn’t hurt much at the time but after a day of LOTS of walking it now hurts to walk, but it’s not very swollen at all. I’m praying it is just a small sprain that heals quickly, otherwise it could be an interesting rest of the trip. Here are a few pictures from the Opera house.

After the opera house we headed to the Louvre and on the way we found some yummy crepes. Here is a picture from outside the Louvre, we didn’t go in, one because they are closed on Tuesdays and two because Dustin and I aren’t really art museum kind of people. 🙂

After the Louvre we headed to Arc de Triomphe walking along the Champs-Élysées the famous street for shopping! No shopping today, but it was a fun stroll. We did stop for gelato in a park before reaching our destination. Here is the Arc de Triomphe. 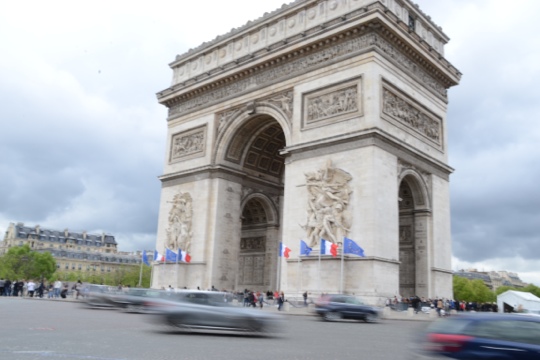 After the Arc we headed to our last stop for the afternoon La Tour Eiffel. Here are a few pictures of this famous spot!

After La Tour Eiffel we headed back to our apartment to rest. Our feet were burning + my right foot was getting worse. I’ll try to post tomorrow or in an update the map of walking. Sarah and Josh went to the grocery store down the street and got me a bag of frozen “carottes” for my foot and my nurse Sarah wrapped up my foot. I rested it and the boys got pizza’s from the italian pizzeria down the street. They were yummy but Sarah said they will be better in Italy…very excited for that!

Sarah and Josh headed out to a Swing Club for some Swing Dancing. We wish we could have joined then but wasn’t sure if my foot was up for dancing. I rested my foot for another couple hours then Dustin and I took the metro to the stop closest to La Tour Eiffel, we wanted to see it at night, and tomorrow we leave before it gets dark. We thought the metro ran until 1:30 am but we were wrong. We arrived at the station around 1:10 am and the last train departed at 12:48. We were VERY far from our apartment and since all the trains and buses were done for the evening, we had to take a cab. The cab driver was a sweet older gentleman, but he didn’t speak a lick of English. After a few moments and him writing in a notebook responses to me, we were on our way home. Our trip to La Tour Eiffel at night was a little bit more expensive than we had hoped with the cab ride thrown in but it was worth it. Here is a picture Dustin took on his phone. 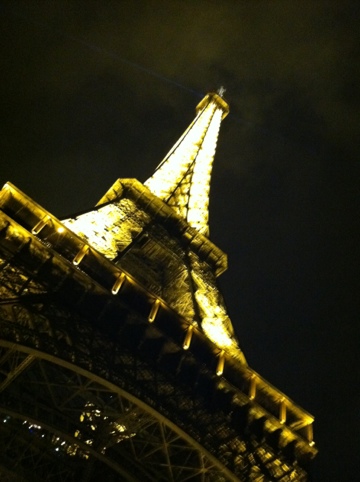 It was another fun filled day…time to get some shut eye. Thanks for reading. 🙂