The boys took the shuttle to the airport from our hotel to pick up the rental car around 7:30 am. It was rush hour traffic in Toulouse, which is home of Airbus, so it took us a bit longer to get on the road. We stopped at a french bakery to grab breakfast. There was a sweet french lady working who did not speak any english, but we easily pointed & stumbled through some french words. In France they have panini’s for breakfast, Dustin and I split one with cheese, chicken, onion, and olive oil. Then we got a wonderful multi-grain baguette to go. Josh had a dream last night that we found a bakery with macaroons the size of baguettes and then we walked into these.

These are french meringues (not quite a macaroon, but close!) We ordered a meringue de fraise (strawberry) to split to try a french speciality. It basically is sugar with egg whites. It tasted like hard cotton candy.

It was just a quick stop, then we were back in the car, vamanos Espana! We had set the GPS in Ireland to avoid the toll-roads around Dublin on our way back to the airport, luckily we realized this before we went too far out of the way, but we did have to turn around to head back to the toll road which was still quicker at the point we were. But we did get a great view of the Pyrenees Mountains & we wouldn’t have come across the bakery had we been on the highway/toll road in the first place. The Pyrenees Mountains are pictured below. 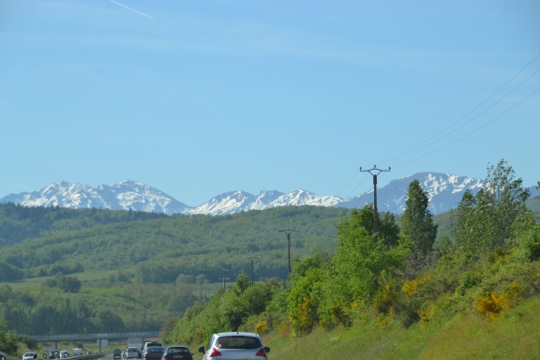 We arrived in Barcelona around 2:30 pm, we quickly found parking and headed to the bike shop to pick up our bike rentals. We were able to rent bikes good for all day for 5 EUR each. It was a good way to get around the city because we didn’t have much time. Many of the streets in Barcelona have bike lanes. We headed down the Rambla towards the coast. We placed by the Mirador de Colom and then continued on past the Plaja (beach) de Sant Miquel, there were tons of people out today because it was beautiful! It was at least 80 degrees today.

We headed back uptown and past the Placa de Toros Monumental where the bull fights occur. Due to time being crunched today we didn’t go in. We found a quick bite to eat…empanadas and pitas. The pita was stuffed with chicken and peppers. It was so good! We kept heading uptown and stopped at the Temple de La Sagrada Familia. This building was designed by Antoni Gaudi. He is famous for the uniqueness of the cathedral and using nature to inspire work. The cathedral is built to feel like a tall forest inside and the ceiling is meant to resemble gold flowers. This building was started in 1882 and still remains under construction with a goal of completion in 2026. 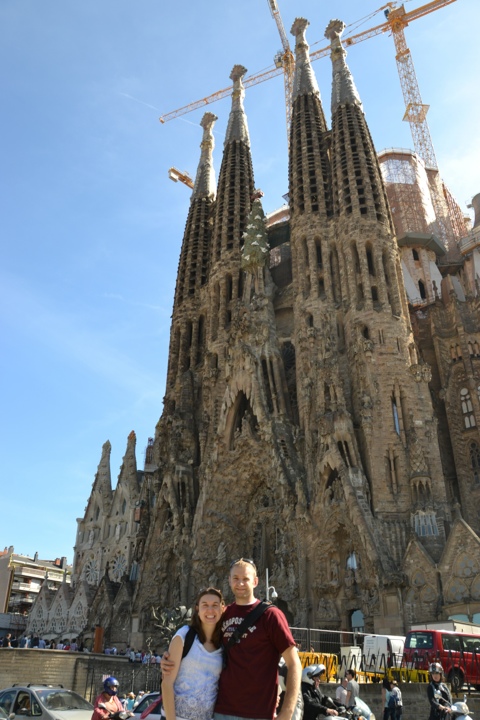 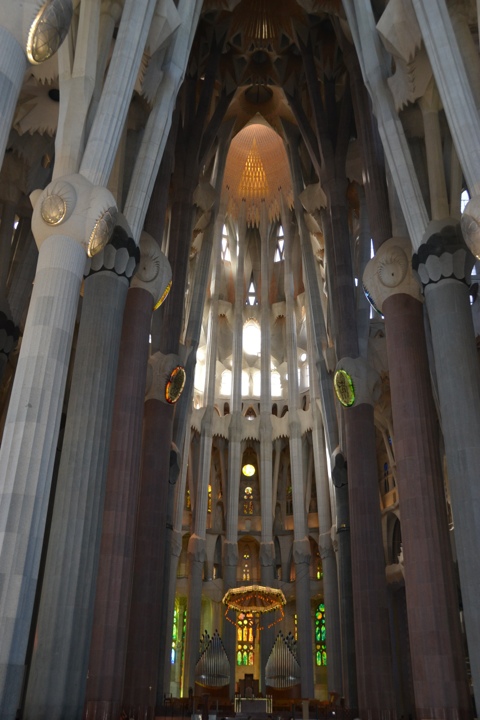 After our visit at the sagrada we rode the bikes around and very unique buildings. 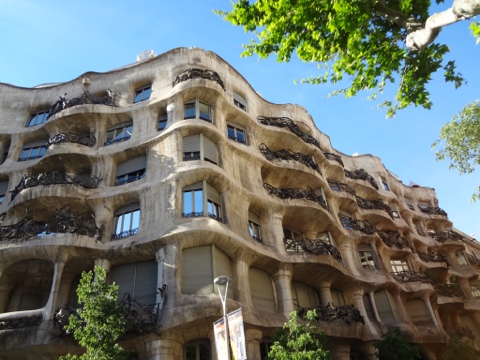 We had to turn in our bikes by 7:30 because the bike shop closed then. We then headed to find a resturant that was a recommended tapas place in a travel magazine from the last flight called Elisabets. On our way we stoped at Mercat Boqueria, the largest open aired market in Barcelona. It sort of reminded me of Pike’s Place market in Seattle, but more merchants. It was late in the day and many stands had already closed up shop. We just saw a corner of the market, but came away with apples, bannana, pinapples, and strawberries for breakfast Friday. 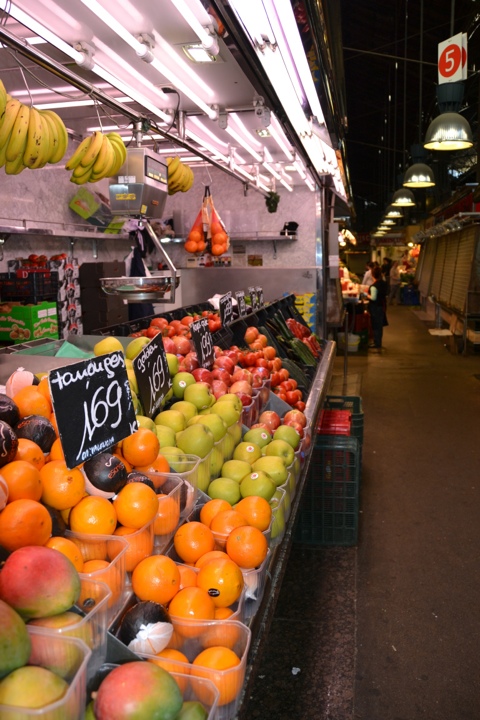 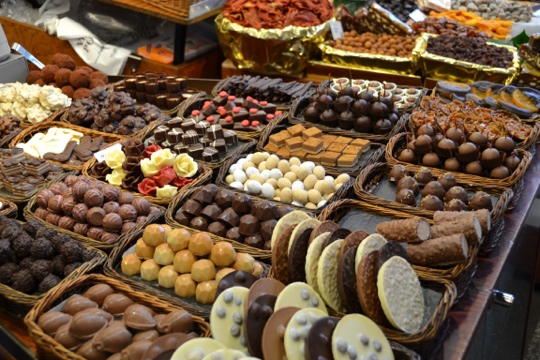 We arrived at Elisabets, it was located on a small steet off the beaten path. No one in the resturant spoke English very well, nor did the restaurant have an english version of the menu. We decided just to be brave and select 5 dishes from the menu and see what came. We thought Dustin might remember some Spanish to help us with the food ingrediants, but after 10 years since his last Spanish class, he wasn’t much help. One of our dishes turned out to be friedmashed potatoes with a red sauce and mayo on top. It was actually tasty. 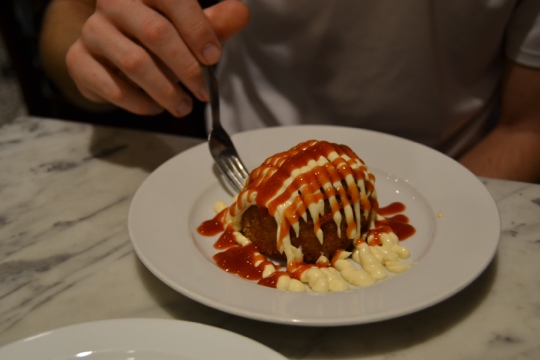 One dish was stuffed olives which Sarah and Josh enjoyed. Dustin and I did try them, but we are not olive fans. 🙂 Another dish was a pork (we think?) kebob which was yummy. We did have empanadas with crab and a plate of what seemed like mozzarella sticks that was supposed to be chicken somehow? It was all very good, just not what I imagined from my experience with Mediterrean Tapas resturants in the US. Maybe because in the US it’s a blend of cultures vs. just Spain. Also different areas in Spain have different cuisine. The most popular dishes in the resturant from other tables seemed to be friend potatoes (fries) with red sauce and mayo & calamari.

We weren’t stuffed since the portions were small, so we walked around a bit and strolled down some of the streets in the gothic quarter. Of course with small portions we needed some dessert. We found a gelati and crepe stand. The boys had crepes and Sarah and I had gelati.

We left downtown Barcelona around 10:30 to head to our hotel in Santa Susana, Spain, located about 50 minutes north of town on the coast. We decided to stay here beacuase it’s cheaper and we will have a head start on our drive tomorrow. Spain will definietly have to be a stop again, I’d love to see the other cities and countryside. And there are a few hot spots we missed in Barcelona. One area we didn’t see was Montjuic, where you take a cable care ride to the top of the mountain. There the attraction highlights the different cultures in Spain and architecture from each culture. For the next trip….whenever that may be. 🙂

(Sorry for the delay in posting, no wifi last night!)

One thought on “Barcelona”