Dustin and I woke up around 8 and walked to the beach. It was a 10 minute walk from our hotel. Dustin and I sat on the beach and relaxed for a few minutes and I spent some time in prayer. I also put my feet in the Mediterranean Sea! It was very very very cold, so there will be no swimming on this trip. 🙂

The place we stayed was an apartment style hotel which was very clean with two bedrooms and a kitchenette. This came in handy because we had purchased fruit including pineapple from the market in Barcelona. We packed up and left our apartment around 10:30 and headed north back to France. Driving here really isn’t all that different besides the cars look different and are manuals. Cars also can be diesel, which ours is, diesel is actually cheaper than unleaded in Europe right now. And Dustin wanted me to add that the speed limit changes if it is raining. The speed limit on most highways is 130 killometers per hour with dry weather.

The car we are driving is really nice. We didn’t ask for GPS, but it has it’s own GPS and you can google a place to go and then click go and it’s maps you there. It is a Renault Laguna. It also has leather seats. The only slight problem is the trunk is not very big. It took us about 10 minutes to unpack and repack to figure out how to get all 3 big suitcases in the trunk with the small suitcase. Yesterday we put it between Sarah and I, but with the 6 hour drive today we wanted it in the trunk if possible. We figured it out!

We stopped for gas and food in a little town called Beziers. No one here spoke english. A lady at least over 65 years old came out of the gas station which looked like it was not touched since 1970. She didn’t understand “Full” and was asking me something in french which I didn’t understand, but we got through with hand motions and our tank was full.

Then we tried to use our GPS to search for a resturant, but it was a small town with narrow streets so we just went to the first place we found. The town appeared to have a large arabic population as many of the women we saw were in full headdress. And the menu at the resturant was in french and arabic. No one in the resturant spoke english either, but we sucessfully ordered deux pizzas, deux croissants de chocolat, et une pain maison, which was some kind of flat bread. Maison means house in french, so I’m not sure if it was an arabic type bread since the man running the show was of arabic descent. It is yummy whatever it is. Here is a picture, it was huge! This was our food for the road. 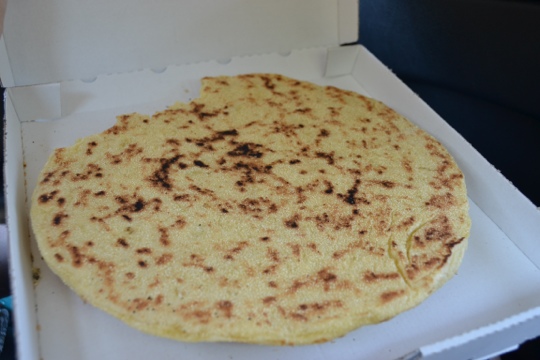 We ate our pizza in a parking lot on some concrete blocks and then headed onward towards Nice.

We had some good laughs at one of our toll booth stops. This brand new Mercedes convertible was towing a camper at least 20 years old. At the same stop a car in the next lane rolled back into another car, and one lady didn’t have money and had to go six lanes across to a machine and back, meanwhile a french man behind her was not so happy and got out of this car yelling to see what was going on. Gotta love people watching! Later we ourselves were the cause of a slow lane at the toll booth, we tried all 5 credit/debit cards we had between us and nothing worked. We had to call for assistance. It’s crazy how many toll roads are here.

We wanted to see the French Mediterranean coast, so we headed down towards Toulon, France and used the GPS to find a beach which was in town. Beautiful! Here is a picture.

There as we were standing on the dock a french man asked us if we wanted him to take our picture. He spoke very good English and asked where we were from. During the conversation he told us about a more beautiful area away from the city with a great beach called Fort de Brégançon. It was about 40 Km east. We headed that direction and I am very thankful for running into this man, because it was amazing. On the drive to there we weaved through vineyards and olive groves. 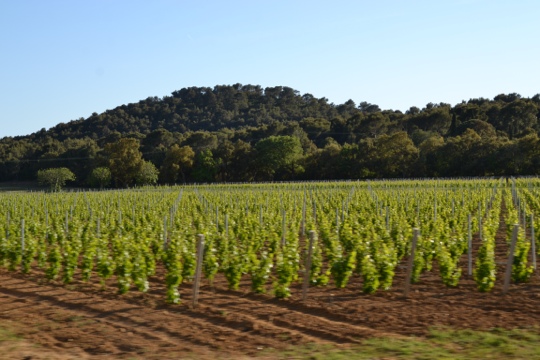 Then we came to a beautiful beach with a fort on one side & an island across the way. I was sad we couldn’t stay and watch the sunset, but we hadn’t had dinner yet despite driving the eastward direction, we were still 1.5 hours away from Nice. Here are a few pictures.

We arrived in Nice around 9pm, checked into our hotel and headed out to find something to eat. Our hotel was a few blocks over from a very neat plaza of restaurants, we ate at one called Cafe La Place. None of the staff spoke very good english here either, Nice seems to be more of a vacation AKA “holiday” destination for french natives. There was a little confusion when I asked for no goat cheese on my salad (non chevre) the waiter couldn’t believe someone would order a salad without cheese, ha! Dustin had pesto pasta, Sarah had the same salad with goat cheese, and Josh had a fish risotto dish. We are all very tired, we did a lot of driving today, but the countryside is beautiful. Tomorrow we plan to stop in Eze, France, drive through Monaco, lunch around La Spezia Italy, visit the leaning tower in Pisa, and end the day North of Rome in Orvieto.

Au Revoir…none of us know any Italian at all so this so be interesting! Josh and Sarah have both been to italy before, so I think we’ll be ok!