We headed out around 9:30 am and took the Metro into town for to see the Spanish Riding School. It is the oldest riding school in the world, dating back to the 1700’s. It has become a large part of the Austrian Heritage. Unfortunately we weren’t allowed to take pictures or video inside, it was like the horses were dancing to the music, they focus on making the horse move naturally. Each horse did high steps and side steps across the arena. The horses were all white stallions.

Afterwards we went back to our car near the apartment where we stayed to get on the road towards Salzburg. Today in Salzburg was a national holiday, Ascension Day. We were glad we bought some food for the road because many of the restaurants in Vienna were closed. Somehow we hit 3 countries on national holidays, it was a Bank Holiday in Ireland, Victory Day in France, and now Ascension Day. We looked up to see if coming another time of year would have less holidays, but it seems the Europeans have way more holidays than the Unites States!

We arrived in Salzburg around 4 pm. This is the only place we stayed in a bed and breakfast. It was ours and Rodewalds first bed and breakfast experience. The lady running the place was a sweet lady and it was right by the mountains. Our only compliant was she had cats and the hallway smelled awful! But our rooms were nice and the breakfast was good. 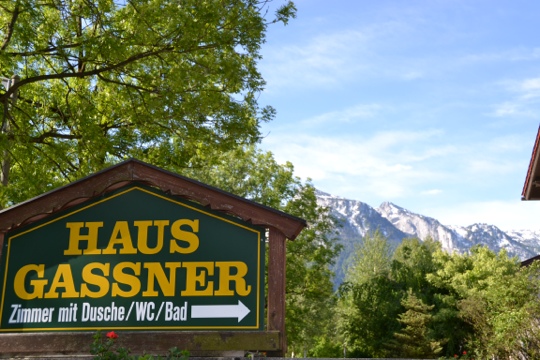 Since it was Ascension Day, our host explained all the parking on the street was free. A plus for coming on the holiday! The Europeans charge for everything, parking, bathrooms, water, bread at dinner, and probably other things we haven’t realized yet. So free parking was a nice surprise. We parked near town and walked under the tunnel into town. We strolled along the famous shopping street called Getreidegasse where we saw the building Mozart was born in. This street is also famous for the iron signs above the stores.

We cross the Salzach River and climbed a large number of stairs to a few lookouts which beautiful views of the city & the Festung Hohensalzburg, a castle on the side of the mountain. Here are some pictures.

We headed back into the “old town” side and walked through some of the famous squares. There was a wind ensemble playing at a festival, presumably a holiday celebration, in Residenz Plaz. There were Austrian food vendors all around, we could have had a huge fresh fish on a stick or rotisserie chicken and of course fried chicken or veal. We passed because the chicken was the only thing that seemed appealing and we had that the night before.

We walked through Domplatz which is were the famous Christmas market is held each year, and Kapitel-platz where locals come to pay chess on a life size chess board. Maybe we should put one of these in Beavercreek or Cedarville!

We also saw St. Peter’s Cemetery which inspired the Cemetary scene in Sound of Music, although the actual seen was shot in Hollywood.

Our host kindly told us about restaurants that were just a km from our B &B where we could get an authentic Austrian meal for less expensive than in town. So we headed back there for dinner. We ate at place called Gasthause Schachlwirt. My only compliant about restaurants here are the cigarette smoke. We did find a place in Veinna with a non-smoking section, but just like back home used to be, smoke travels to the non-smoking section, so after dinner I had a huge headache. But the meal was good, Josh and Sarah had the cheese Spätzle and Dustin and I have beef goulash with Spätzle. Dustin really wanted the cheese Spätzle, but I convinced him that we need more than cheese and grains at each meal, ha! Since he has had Spätzle for every meal at this point in Austria. I think he liked the goulash more than he wants to admit! And we both enjoyed marinated asparagus and strawberry salad. 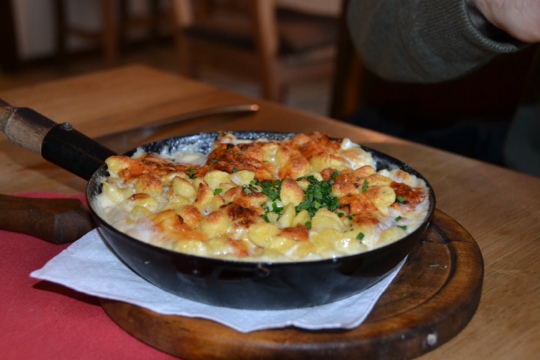 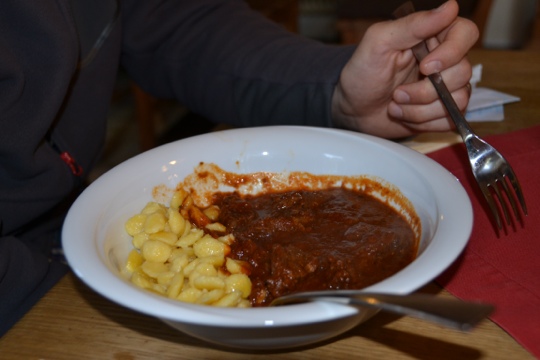 We went to bed early, one because I had a huge headache, and two because the wifi signal wasn’t strong enough in our room to post anything. Oh well I need the sleep, this was the first time on this trip that I’ve sleep more than 8 hours, it was nice!