We were up early for a busy day in St. Lucia! We were were docked at in the town of Castries which is the capital and the primary port on the northwest coast. It was founded by the French in the mid 1600s, but has been destroyed by numerous hurricanes and fires, mostly recently a huge fire in 1948 that started in a tailor’s shop and burned most of the city to the ground. They also had a lot of damage from a hurricane a few years back.

We booked a land and sea tour with Spencer Ambrose Tours prior to coming on the trip. They had much better prices than the ship excursions & great reviews.

The reviews were right on target, for the land portion we had a private tour for the 4 of us, mainly due to us being the only people that booked both land and sea today, but the van could have held a few more people.

Our first stop was the Cathedral of Immaculate Conception in downtown, which was built in the late 1800’s.  We then saw Fort Charlotte, now the governor’s house from the road, and we drove through an old barrack which now houses their college, St. Mary’s College.

After that we drove through two fishing towns, the first Anse La Raye is known for their Friday night fish festivals. And the second town Canaries is known for their bread. Our tour guide “Small” who was Spencer’s brother, stopped and purchased us some of this bread that is made in a clay pot oven. Yum Yum! (ok to cheat on bread when its a supposed to be the best on the island!)

Here is our picture with one of the fishing villages in the background. 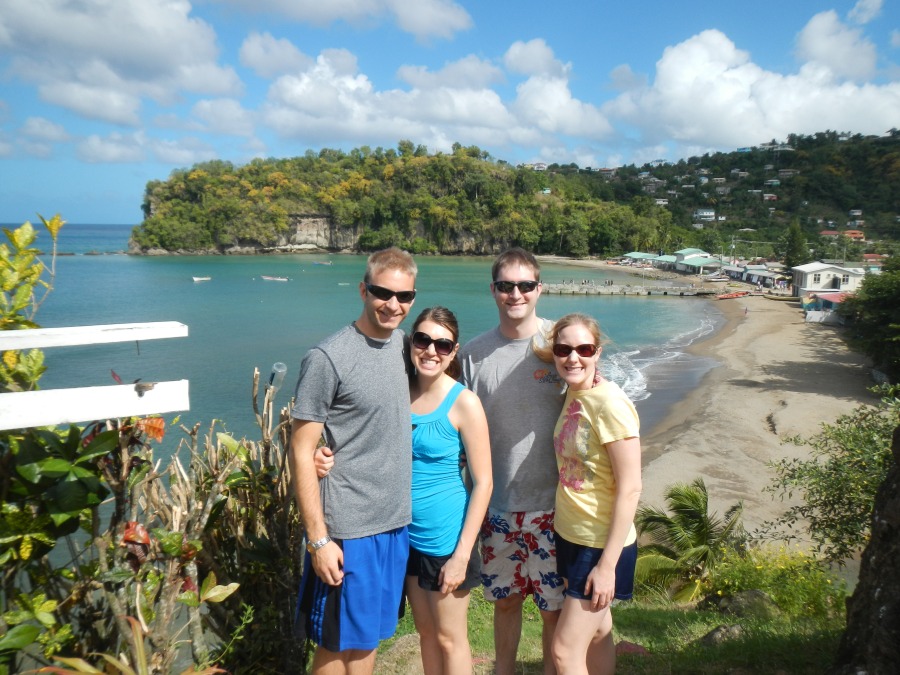 Also on the drive we stopped alongside the road where a farmer was harvesting bananas at the Roseau Banana Plantation, we had no idea that bananas looked like flowers as they grew. We got to try fresh St. Lucian bananas. Super yum! Bananas used to be St. Lucia’s biggest money maker, but now it is tourism. They still have a large amount of banana plantations. 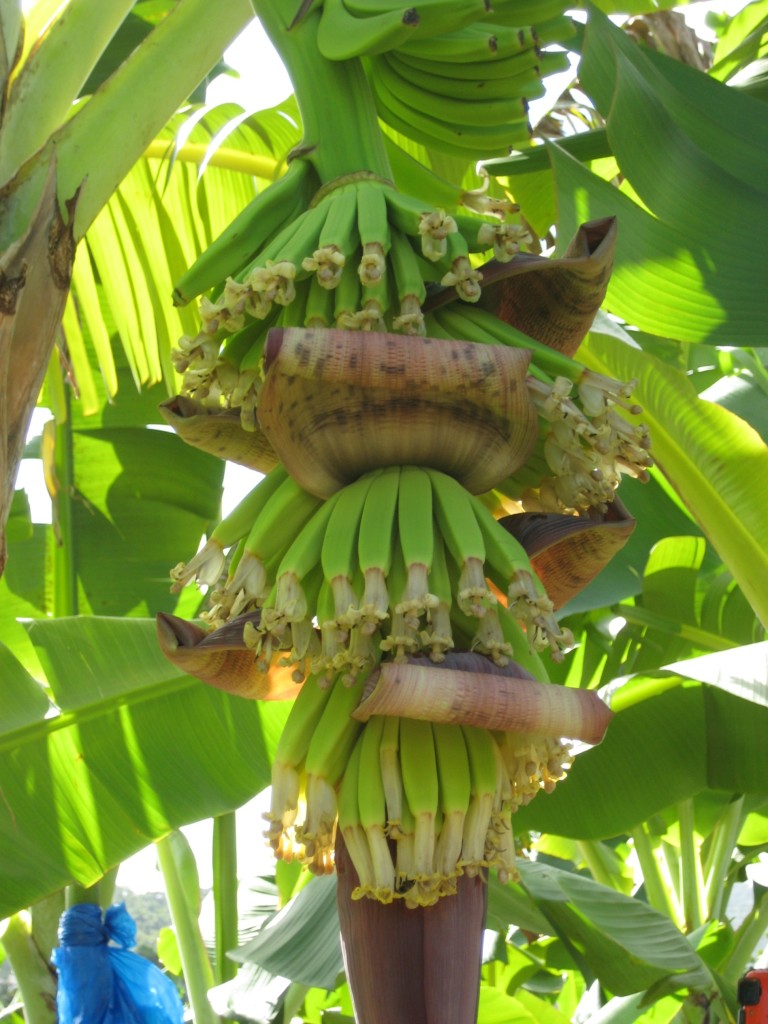 To finish up our land tour, we saw Toraille waterfall & springs and the Sulphur Springs volcano which were were able to drive into the crater. It was cool to see the sulphur rising out of the rock, but definitely smelly. 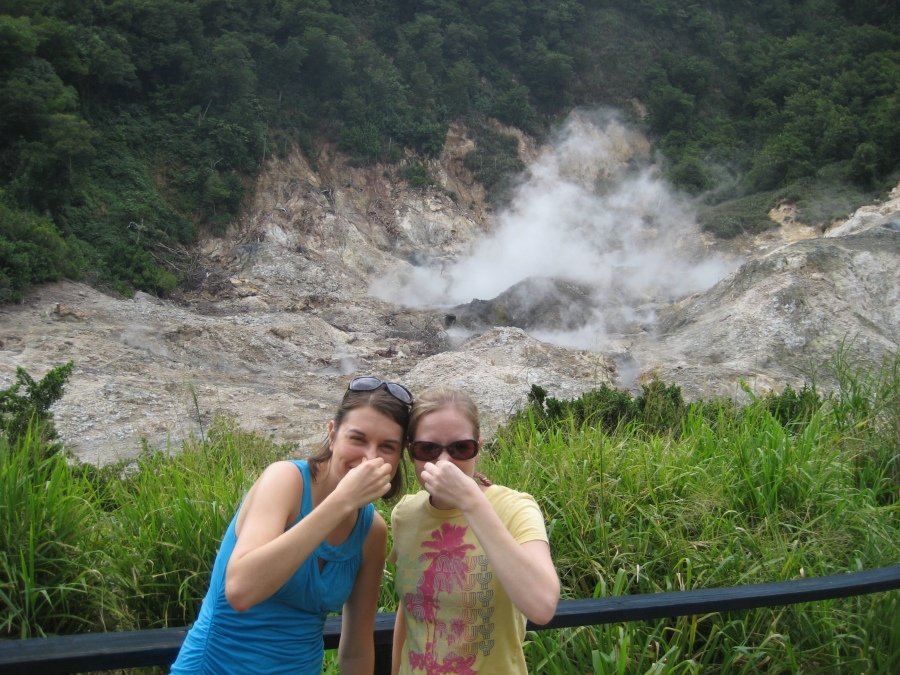 We parted ways with Small at a dock where our other tour guide Leandra showed us to the boat. We had private boat ride to the Twin Pitons which are the most widely recognized landmarks on the island. They are twin volcanic lava domes that rise over 2,500 feet out of the sea.

There is a beach between the Petit and Gros Pitons called Jalousie where we shortly arrived. 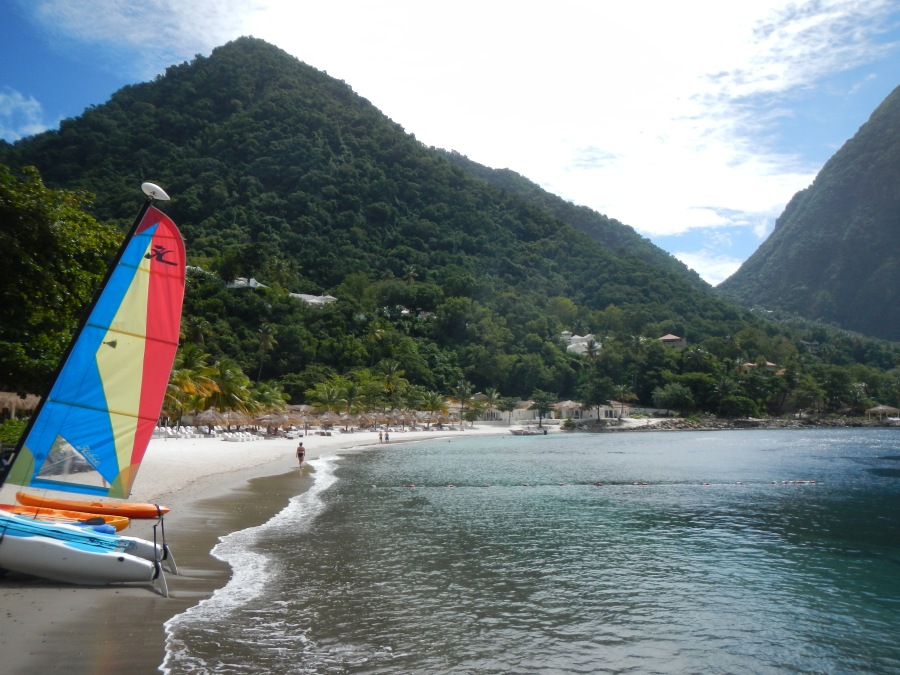 The scenery was breathtaking. The Bachlor TV show had filmed some scenes in this area a few years back. We had a local cuisine lunch prepared for us including yams, green banana salad, and chicken. 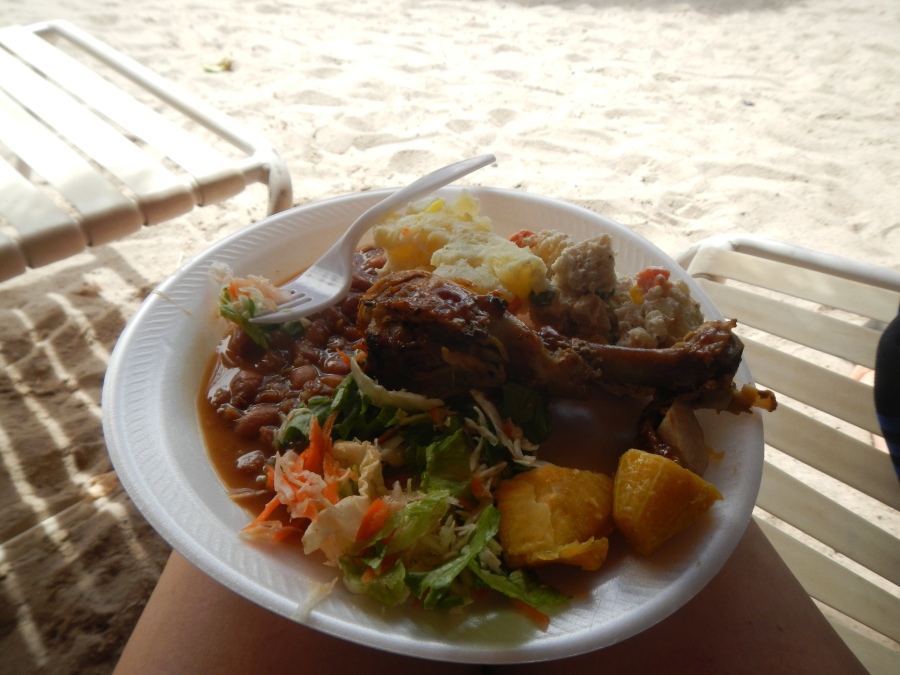 Then we were off to swim in the crystal clear water. The boys grabbed snorkel masks and headed to the snorkel area. They joined us swimming and convinced me to check out the fish in the snorkel area as well. It was awesome, so many different types of fish. Here are a few pictures! 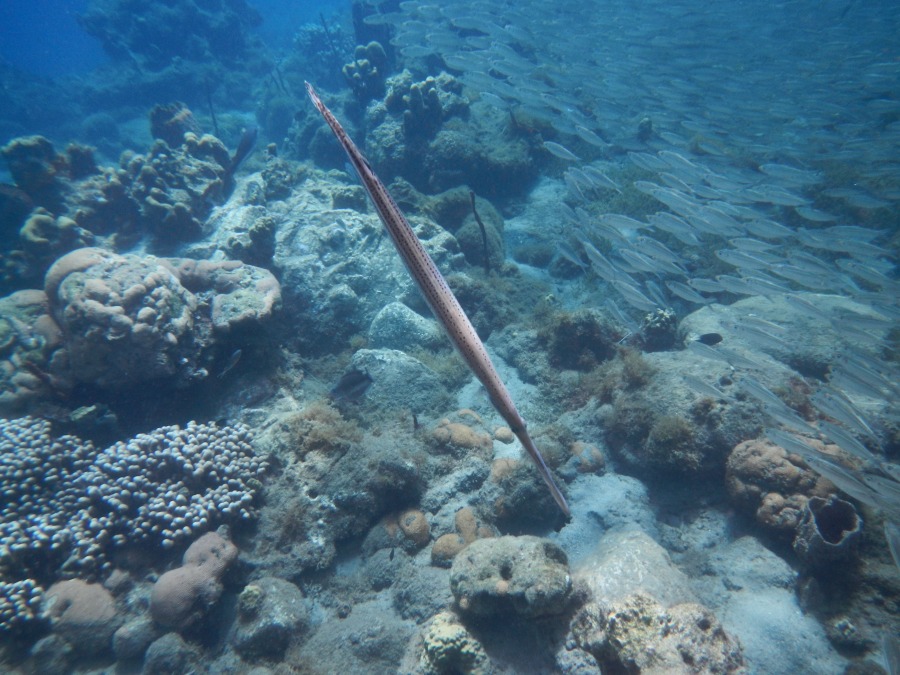 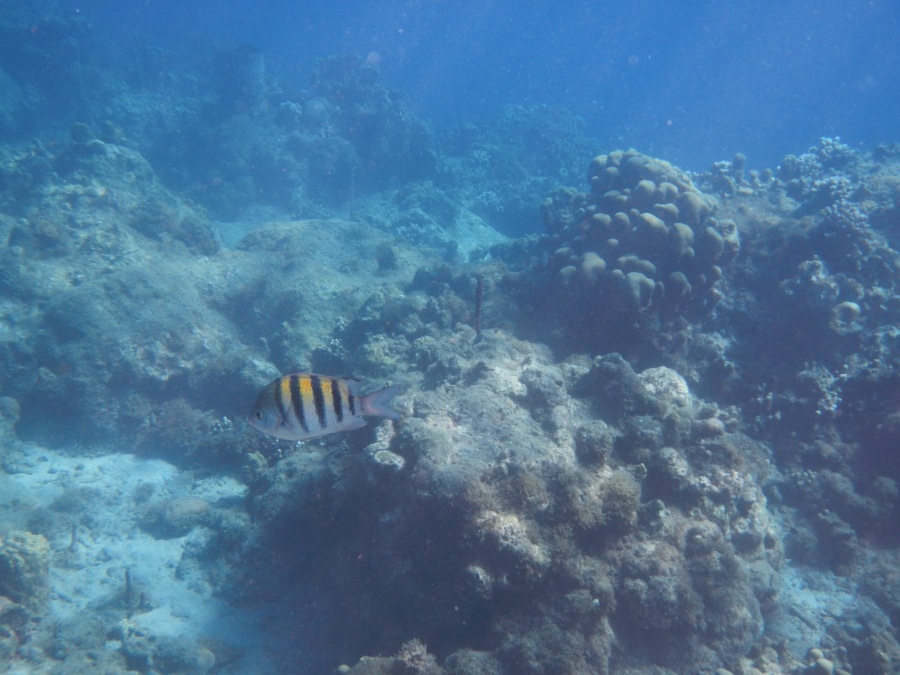 We were able to stay on the beach for a few hours and then boarded the boat back to Castries. This time there were a few others (about 10 people total on the boat).

Here’s a good shot of the Pitons as we were heading out: 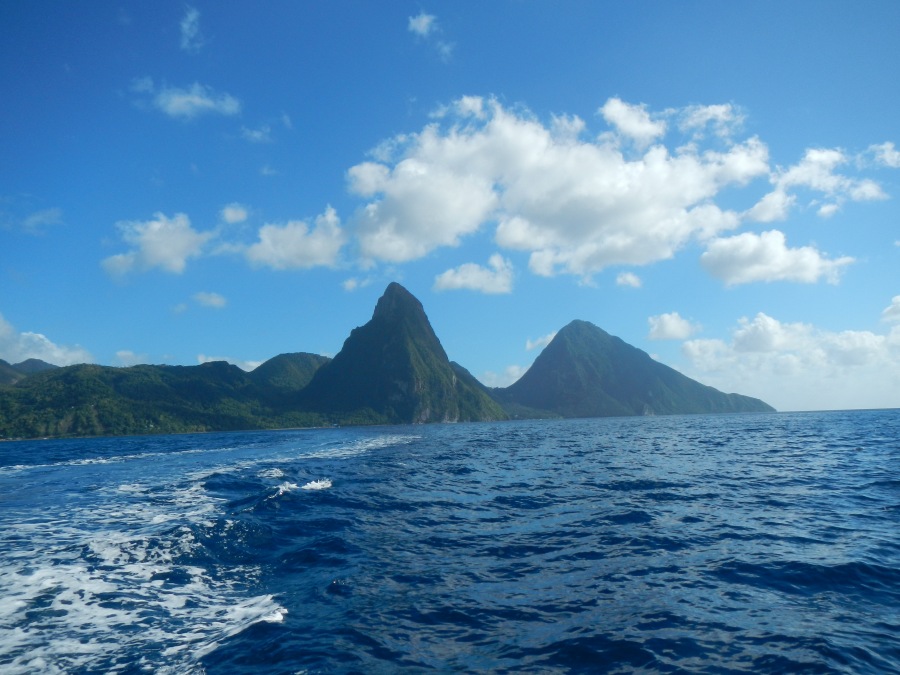 This time we got a tour by sea, we saw the fishing villages from the boat as well as saw a bat cave, a rock formation with a key hole shape, & an area where the “Pirates of the Caribbean” filmed a few scenes. 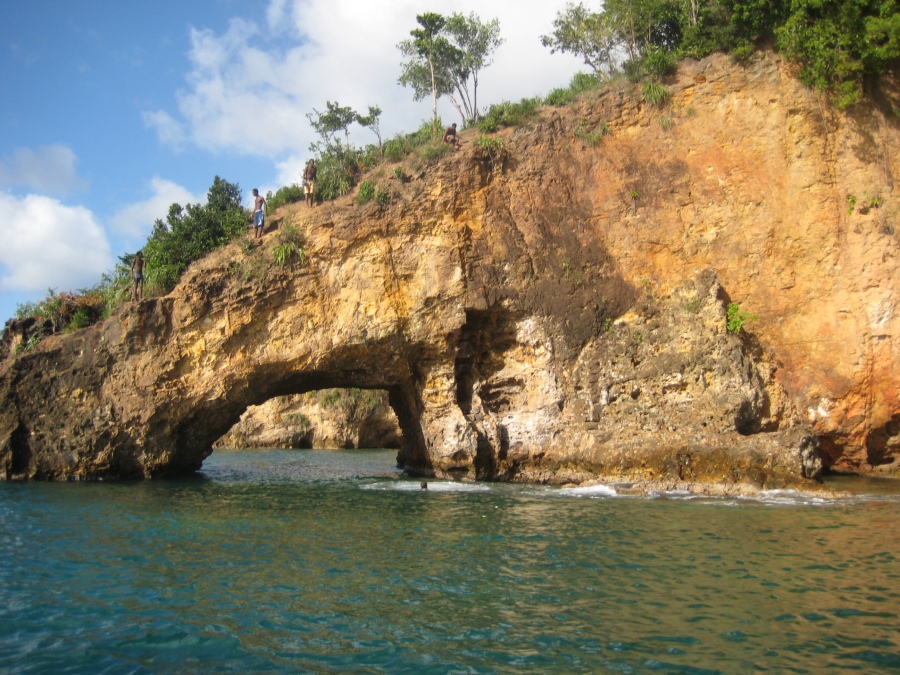 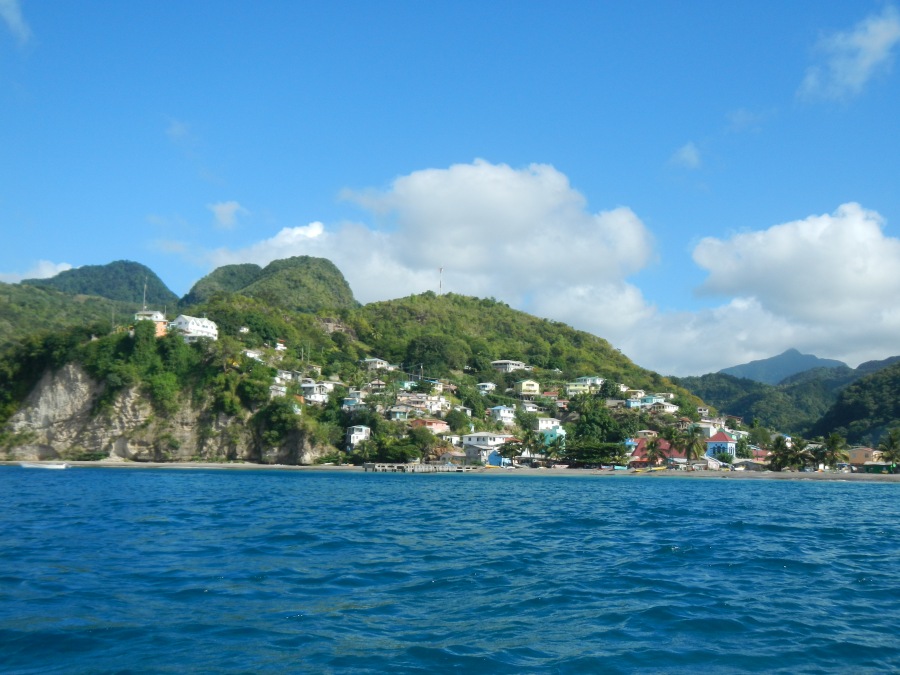 After about a 45 minute boat ride we were back to the main port in Castries.

We had a great time and many good things to say about this tour company. We highly recommend them. They were always asking us if we needed water, if we were doing ok and had a cooler of pop/water with us the whole time. Definitely great service.
After we got back the boys went straight to volleyball & I headed to the workout room then met up with Melissa for a salsa dance class.

Dinner tonight was shrimp for Dustin & an amazing eggplant parmesan for me! It tasted very much like eggplant pizzas Dustin & had I made from scratch in the summer. Delicious!

After dinner we headed to the “Guess this Country Song Trivia.”  We had to guess the artist & song title for maximum points. It was super hard we had only about 5 sec of each song to go off of, then had to guess artist & song name..we still somehow tied for 3rd place! Probably because the people that really knew country music well couldn’t get the songs from the super short clip either. Dustin really surprised me with his knowledge of country music, he says you just know some things like that when you grow up in a farming community!

After that we headed to the Love & Marriage Game Show, they picked three couples from the audience to participate. The longest married couple, newlyweds, and one couple in between. We tried to get on the show, Matt & Melissa almost got on, but in hindsight I think we were both glad we didn’t because some of the questions were a little too personal. 🙂 It was fun to watch though.

After the game show they had a party with dancing and a midnight buffet up on the pool deck. We danced a few line dances & of course checked out a few treats from the buffet that we certainly didn’t need, but ate anyways. 🙂