Today’s adventure started in St. Johns Antigua. We departed the boat at 8:45 for a 9am tour of the “Best of Antigua.”

Next was Shirley Heights another fort that looked over the English Harbour. The view was incredible from here. 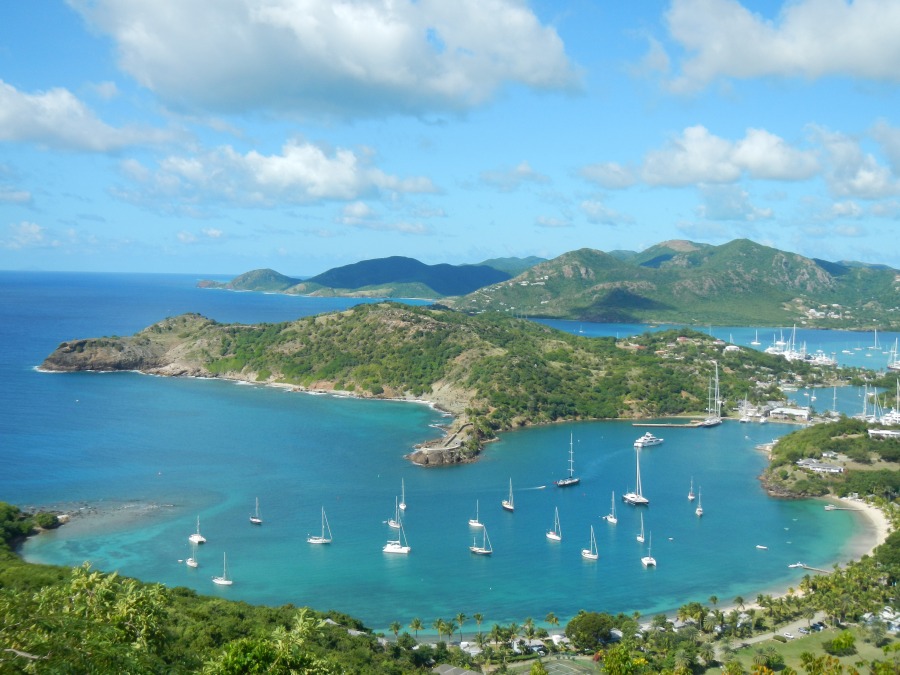 Our final stop was Nelson’s Dockyard which was located in the English Harbour. Ships of the Royal Navy came here for refitting and repair as they battled with the French and Spanish for dominance in the Caribbean. All of the buildings in the area were built from bricks that were counter weights in the ships coming from England. It was incredible to see how well the buildings held up since they were built in the late 1700s.

After the three hour excursion, we got back on the ship and headed to the Windjammer cafe for lunch.

Once we were full (again!) we grabbed our beach gear and headed out to find a beach. We were able to find a taxi at a more affordable rate, only $3 per person, each way. We took a short cab ride with Derrick to Dickenson Bay. While we were driving, we mentioned how weird it was to listen to Christmas music while at the beach and Derrick popped in an Alvin and the Chipmunks Christmas CD! Awesome!

Dickenson Bay was one of the more crowded beaches we were on, as it was near several hotels (including a Sandals resort), but the views were of course amazing. We found a spot in the shade and set up camp for a few hours.

While we were there, we had people asking if we wanted to rent jet skis, catermarans or kayaks, plus the newest attraction, the rocket man. This was a pack that riders would wear on their back and was powered by water, that could shoot the rider up to 35 feet in the air. The power comes from a jet ski like device that is attached to a hose and all of the water is pushed in a downward motion allowing the rider to “fly.” Here is a picture of someone flying.

Matt and Dustin talked to the owners and found out that the device costs $100,000 to purchase and it rents for $100 for 15 minutes or $150 for 25 minutes. Needless to say we did not participate but enjoyed watching from shore.

Derrick (our cab driver) came back a couple of hours later and took us back to the dock.

We had been disconnected from the internet since Saturday when we left Puerto Rico and we were anxious to see what was going on in the world. It was good for us both to catch up on a few emails. We found a small little place where we purchased some drinks to pay for our “free” wifi. I got a Mango smoothie and Dustin got his favorite tropical drink, Ting. It’s a grapefruit soda that’s loaded with sugar, but it’s super tasty. His fav in Jamaica! I spend lots of time in Jamaica telling the patients not to drink it. 🙂

Matt and Melissa video Skyped home with his parents and their daughter Elliana while there. Technology is so amazing.

After getting back on the ship, we split up again with the boys heading to the volleyball / basketball court and we headed to the gym to burn a few calories. The boys played volleyball, seeking to bring home another gold medal. They ended up playing on different teams and Matt’s team won gold and Dustin’s team came in second. Medal count: Matt – 4 gold, Dustin – 2 gold, 1 silver.

Today’s dinner was formal, so we got dressed up and headed to dinner. 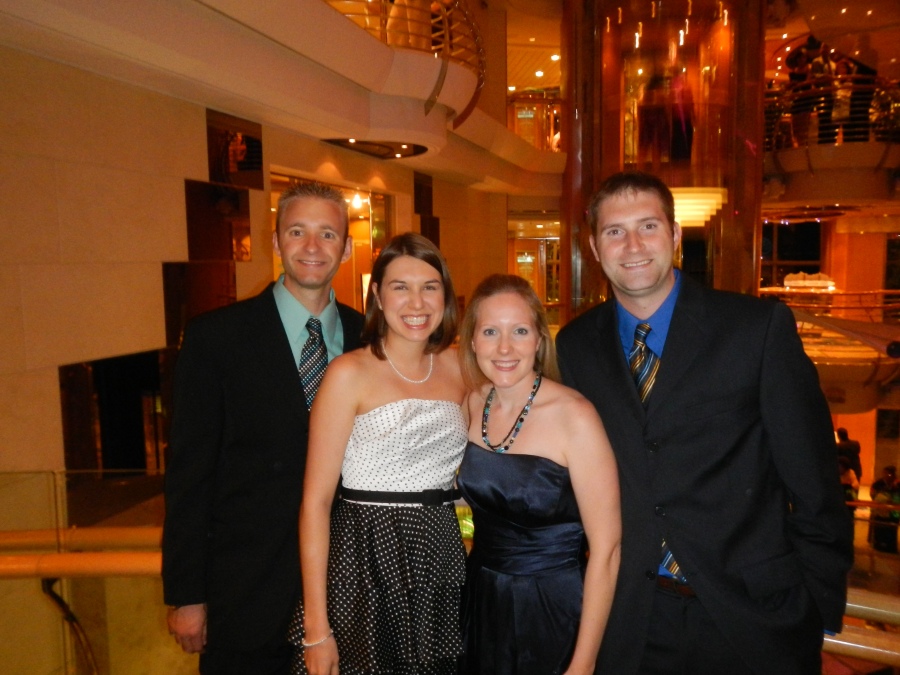 The theme of tonight was lobster / seafood. Matt and Dustin were super excited as they had been waiting all week for lobster night. They of course ordered the lobster / shrimp, as did Melissa and I had the beef short ribs.

Sergio (our waiter) brought Matt and Dustin another two servings each of lobster tails and shrimp without even them asking, talk about amazing service!

After dinner, Melissa and I headed to the theatre production and the boys played billiards. Melissa and I were definitely impressed with the talented singers and dancers. This show featured their orchestra too, which was awesome! When we met them later in the Muir’s room, they were juggling oranges. Ever since they went to the juggling session, they took every free opportunity to get some practice in.

Off to St. Croix tomorrow!