Gabin is one of her favs!

Since I took this week off, I actually have time to share some pictures with you of our Christmas celebrations! We spent the last week with both of our families and of course Baby K got lots of presents! We got to spend a few days in Dustin’s hometown, where we spent an evening with his Dad’s side of the family, an evening with his Great Aunt Linda, and we had our Hartzler Christmas on the 23rd. We also got to see Dustin’s cousin Nick and his family. Grandma Hartzler and Aunt Ashley dressed her up in this cute lamb pjs to open presents! Grandpa Hartzler raises lambs on their farm down the road from their home. 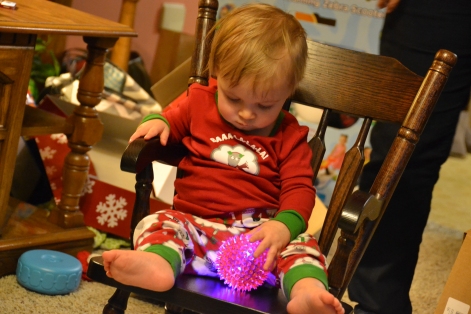 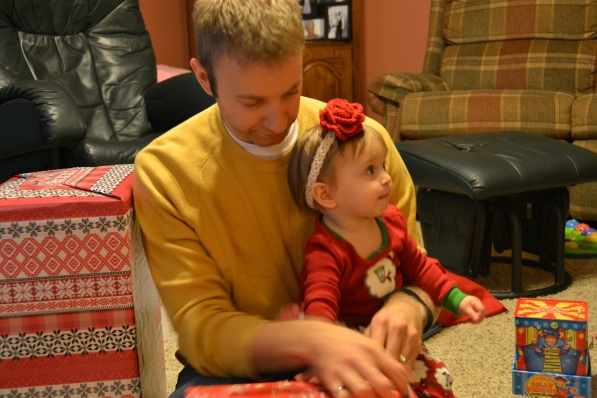 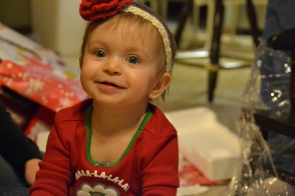 She had a blast and started to figure out the whole present opening thing! We even got a picture of the big kids. 🙂

We have started eating all our books.

On Christmas Eve we headed back south, with a quick stop in Columbus for groceries since we were hosting Christmas Day Dinner. Luckily the Dublin Trader Joe’s wasn’t as crazy as I expected on Christmas Eve! I got almost everything on my list, and we made it back to our house to have an hour of playtime before hitting the road again. We spent the evening with a stop at Great Grandma’s house in Harrison and dinner at Jaclyn’s in-laws with my family including my Aunts. 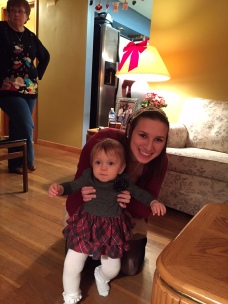 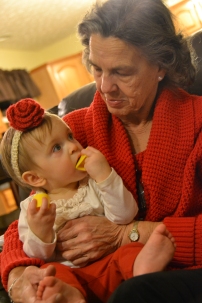 K did great after spending 5 hours in the car that day we were able to entertain her with one of her new toys on the way home! Christmas Day was fun, we had my family here most of the day, it was great to have quality time all under one roof.  Of course there was time to open presents here too. 🙂 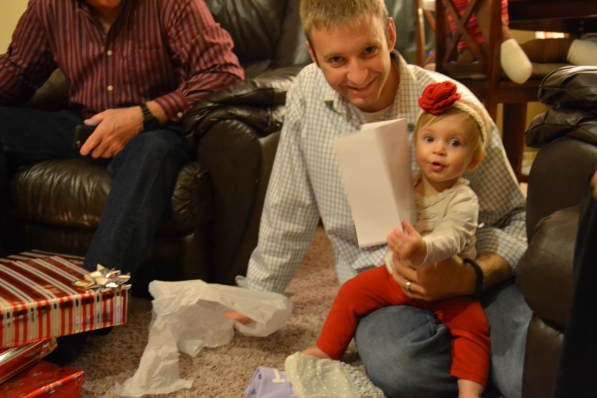 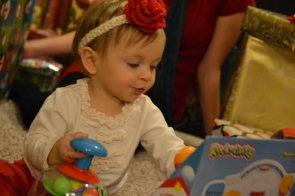 Before everyone left we got some family photos.I would say this Christmas has been one of the best ones yet, quality family time with a super cute little princess. She’s growing up so fast! Hope you and your family had a Joyous celebration of Christ’s birth! 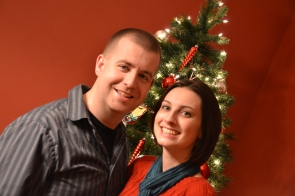 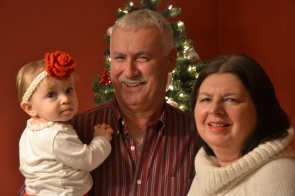 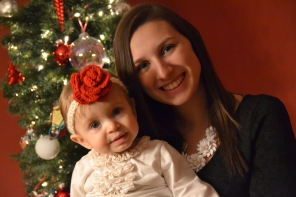 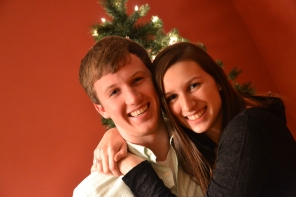 ” Joy to the world! The Lord is come
Let earth receive her King!
Let every heart prepare Him room” Hello Family and Friends, we can’t believe it’s time to write our annual Christmas letter again. This year has flown by! To start the year Dustin spent a few weeks on the road traveling to Las Vegas and San Francisco for his new job at Automattic. He was able to spend some time at the Automattic Headquarters AKA “Hawthorne” and meet some of his new co-workers. February we spent preparing and anticipating Baby K’s arrival! In March we were blessed to meet our daughter after a few weeks of additional waiting. March 12th to May is pretty much a blur of sleepless nights, although Dustin did manage to take a work trip to Barbados while I was home with a colicky 5 week old. He won’t be able to live that down!

In June, we welcomed a brother into our family, as Jaclyn tied the knot with Sean! Our summer was pretty low key, Melody started back to work late May and it was a nice transition because the semester was over, so she was able to focus on her practice site and preparing for the fall.  Dustin traveled to Wisconsin for work, he probably could have gone somewhere more exotic, but the group decided to join up with the Milwaukee WordCamp Conference. This also helped the wife jealously factor!

In August we had to travel on the same weekend, so thankfully Grandma and Grandpa Hartzler were available to take care of Baby K! Melody made a whirlwind trip to Chicago for a training session, leaving Dayton at 7am Saturday and returning Sunday afternoon. Dustin headed to Dallas, TX to speak at the Podcast Movement. 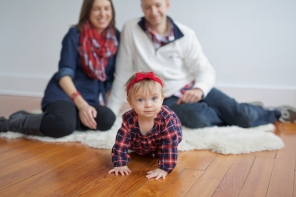 By September, classes were in full swing at Cedarville, Melody coordinated two courses and kept busy with her clinical practice this fall. Dustin got to attend his first Automattic Annual Grand Meet-up. This year it was held in Park City, Utah. He had a blast getting to meet everyone that he works with online. As soon as he returned we headed to Florida to take Kenley to the beach for the first time! If you missed that post, here it is!

In October we added another brother to the family. Ashley and Brian tied the knot as well. It was fun to get to introduce Kenley to lots of family and friends with two weddings this year! Before we knew it Thanksgiving was upon us and then Dustin headed off the first week in December to Austin, TX for a team meet-up.

As we look back on the year, we can’t believe we have a 9 month old already! She is crawling all over the place, pulling up, saying Da-Da and the occasional sound that seems like Ma-Ma. The Da-Da is when she’s happy and the Ma-Ma is only when she’s upset, ha! We are so thankful for her, it’s amazing to see the world through her curious beautiful blue eyes. As we reflect on our Savior at Christmas, it amazes us that an All Powerful God took the form of a helpless child to come into this world to save us. The gift of God’s Son as a sacrifice for our sins has become even more real as we hold our precious child.

“Have this mind among yourselves, which is yours in Christ Jesus, who, though he was in the form of God, did not count equality with God a thing to be grasped, but made himself nothing, taking the form of a servant, being born in the likeness of men.” ~Philippians 2:5-7~