We haven’t posted many travel posts recently because it’s been a little hard to get away with baby K in the last year. (Not sure when I have to stop calling her baby!) But thankfully Grandma was willing to watch her while I enjoyed a few days in the sunshine! Dustin’s team at work meets somewhere to work on projects and this time they were meeting in Belize specifically on the island of San Pedro. Since I normally try to make it to the beach a few times a year, I jumped at the chance to join him for part of the week. Right now I really needed some sunshine and relaxation.

The little plane to fly to San Pedro Island

Dock at the resort 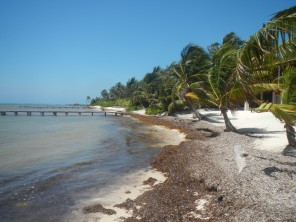 Beach at the resort, lots of sea grass. 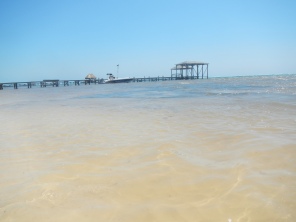 Beach Area at the resort 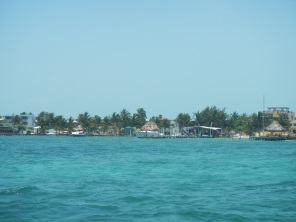 View from the water back to the coast

Belize is just South of the Yucatan Peninsula in Mexico. The people here even travel to Sam’s Club in Mexico for groceries/supplies sometimes (seems crazy they have Sam’s Club in Mexico!). Belize hasn’t quite hit their tourism potential but the island of San Pedro does have quite a few tourists. Once I landed in Belize City, I then had to take a small 12 passenger plane over to the island. This was very low key, my boarding pass was a hand written slip of paper. The flight took about fifteen minutes. Once on San Pedro, I took a short taxi to the Coastal Xpress which was a water taxi. I could have walked there, but it was easier to just be dropped off since I wasn’t with a group and didn’t quite know where I was heading. Thankfully I was able to get an early flight to the island which put me at the water taxi only 10 minutes before it left. It took about thirty minutes to get to the resort with the other taxi stops. But once I was there it dropped me off right on the dock and Dustin was there to welcome me. The place they rented was a small resort that had 12 rooms. They catered to groups from companies like this or people taking a yoga retreat or something similar. It had a central kitchen/dining building, two other buildings with rooms, and a pool in the center. It was right on the water, but there was a lot of seagrass which made swimming a bit difficult right there. But you could hear the waves and the breeze of the ocean was on us at all times!

The rest of the day on Wednesday I enjoyed the sunshine and the pool while the team worked until dinner. On Thursday was their “fun” day on their meet-up. So I was able to join them on their snorkeling trip. We left in the morning after breakfast, boarded a boat that took us back to the main part of San Pedro. There we got on Lady Leslie the snorkeling tour company. This was a very nice sail boat. The staff was very courteous and took care of everything during the day. I would highly recommend them to anyone traveling to this area. We first headed to an area of the reef called “ Hol Chan.“ In this area we all got out and swam around the reef for about thirty minutes. We saw all kinds of fish, sea turtles, beautiful coral and a few sharks! The next stop was “shark alley.” I thought our captain was kidding when he said we would be shark bait, but he wasn’t. The boat crew fed the sharks fish while the group got in the water to snorkel with them. I thought to myself, “I need my hands and feet to take care of the little babe I left at home..so I think the view from the boat is just fine.” These were nurse sharks, which are a little different than other types but still dangerous in my mind! Their mouths look like catfish but they still bite then twist whatever they are eating. 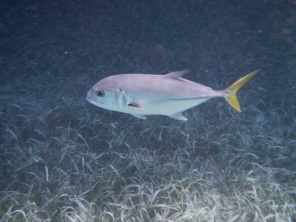 Nurse Sharks! We stayed on the boat while most everyone else got in!

Relaxing on the boat. 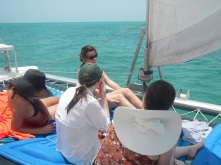 Some of Dustin’s team!

After the sharks, the boat took us to another island called Caye Caulker where we walked through the town and had lunch. The lunch was amazing, we had lots of veggies, fish, chicken, and shrimp. It was all cooked in traditional Belize style. We still had a little bit of time, we found a restaurant right called the Lazy Lizard on the water that had some shade and tables actually in the water, so we were able to get in and cool off for a bit before heading back to the boat. The restaurant was at the edge of the inhabited part of the island, the other half of Caye Caulker is across the water way, it used to all be connected but was separated by a hurricane.  It was a 2 hour sailboat right back to San Pedro and then another fifteen minutes to our dock. We enjoyed the pool back at the resort and dinner in the evening. Friday and Saturday I enjoyed the resort while the team worked. They worked a little less on Saturday to finish off the trip. Dustin and some of the team did some kayaking on Saturday.  Saturday night we had dinner outside enjoying the ocean breeze before we headed back to the states on Sunday.

Lunch at Wish Willys! It was amazing, we got to try all kinds of local foods.

Walking around in Caye Caulker 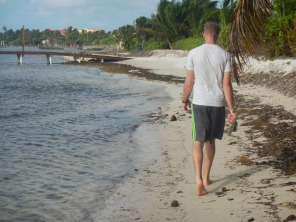 Pool at the resort

Dustin went Kayaking with his team 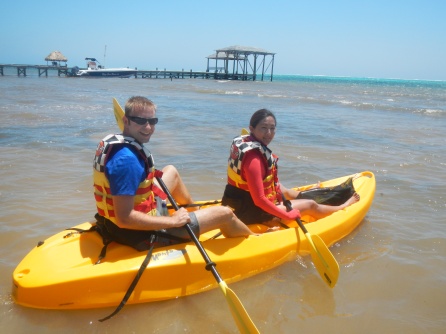 View from the beach

Overall Belize was beautiful and it was great too see. It’s not very commericalized at all, so if you are looking for a remote place to dive or snorkel, it’s a great place! If your looking for a big resort with all the ammentities and lots of beach..probably should head north to Mexico! 🙂   It was a short trip for me, but I was able to get a little tan (no sunburn for me!) and some relaxation. Until next time…