After our quick stop in Toledo, Spain, we headed back to Madrid to take the high speed train to Valencia, Spain. Valencia is the city where Cedarville has a faculty member who spends 10 months of the year here to facilitate student experiences abroad. We headed there to check out the Institute of Spanish Studies where I would be teaching next year if students sign up for my courses! On Sunday evening my colleague Andrew took us on a walk down the “river” which is actually a central green-space for the city, a cultural attraction known as the garden of the Turia. After the great flood of Valencia in 1957, the river was diverted he Turia river was diverted and turned into this space to avoid future flooding in the town.

During our walk I discovered the valencian drink called Horchata de chufa which is a drink made out of tiger nuts (chufa). Tiger nuts are not actually a nut, but a tuber (think potatoes). They are much cheaper in Spain than in the US so I made sure to bring some home from the grocery store to make some Horchata at home! A great find for someone who can’t have dairy right now. 🙂 We saw the City of Arts and Sciences at the end of our walk. This is a entertainment-based cultural and architectural complex, they have an opera house, IMAX, aquarium and other museums. Afterwards we enjoyed a nice dinner with Andrew and his daughter at a fabulous Argentinean Steak House called Gordon’s. This was one of the best meals we’ve had in Spain!

City of Arts and Sciences

City of Arts and Sciences

People pay to try to be like a hamster!

Dustin checking out the outdoor gym equipment at the park.

On Monday Andrew and the Director of the Valencia ISS picked us up for a quick car tour of Valencia. They took us out of town a bit as well to Albufera. This is a freshwater lagoon with an abundance of fish surround by rice fields. We made a quick stop to take a few pictures of the Arenas and Malvarrosa beaches, and then we drove through the old city of Valencia. After the tour we had a meeting to discuss plans for next summer and then enjoyed lunch with one of our pre pharmacy students and her host mom. It was fun to be in a Spanish home and see what life looked like on a daily basis. Her host mom took us for ice-cream/sorbet at La Golosa. After lunch we walked back to our hotel and I took a quick siesta to try to get rid of a headache. 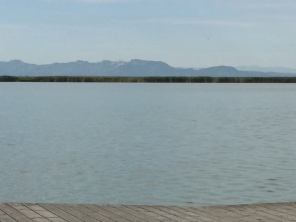 Quick stop to take a picture at the beach near Albufera. 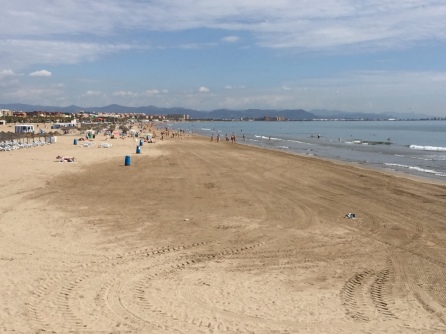 Then two Cedarville students picked us up for a walking tour around the old city and dinner. We climbed to the top of Valencia Cathedral in the Bell tower “El Miguelete.” The views were amazing. Thankfully the bad weather held off for us to be able to get back down and find a restaurant. It was about to dump buckets so we ended up at an Italian restaurant for dinner because it was an easy place to duck into. We enjoyed dinner with the students and learned about their experiences in Spain. We all headed our separate ways after dinner and it was still pouring buckets outside and storming.  We made a quick stop at El Corte Inglés the Spanish department store that has a grocery store in the bottom level. We got 4 bags of Chufa (tiger nuts) and a few snacks for the flight back.

Amazing view from the Cathedral 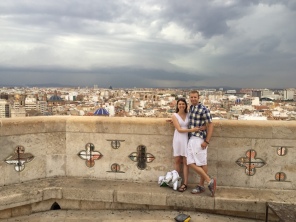 Us at the top of Valencia! 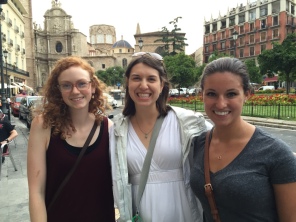 CU students who we had dinner with!

Bell Tower at the Cathedral

Dustin checking out the kids play gym at the beach 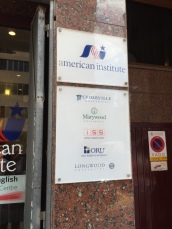 On Tuesday Andrew picked us up for another meeting at the office and then he showed us another part of town that had a nice park. We also were able to spend a few hours at the beach before heading to the airport. We flew back to Madrid on Tuesday night to catch a Wednesday morning flight home to the states. The flight was cheaper than the high speed train, and then we just stayed overnight on Marriott points at the AC hotel near the airport with a free shuttle.  #travelhackers 🙂  We enjoyed our time in Spain and I am hopeful I will be able to use what I learned at the conference to modify my courses for Spain next summer!