“It’s getting Hot in here!” Is the theme of the week!  Monday started off HOT HOT HOT. I even rode the bus home from work because it was too hot. One thing I’m looking forward to when we get home is central AC. Even though we’ve only truly had 3-4 really hot days, it always seems hot in our apartment. We have one unit in our apartment that keeps it fairly cool except when we have to shut K’s door at night to get her to sleep it gets hot in there. Monday Aunt Ash took some fun pictures of K while we were at work! Her sunglasses are from Babiators, a Shark Tank company!

Fun pics with Aunt Ash
On Tuesday evening, we rode the bus down to the pharmacy I had visited earlier in the month to make a return; I thought it would be a good idea to purchase some face cream but it made me break out all over my face! Oh well lesson learned, stick to stuff you know works, so I’m trying to make mine last. And I have already placed my 100% Pure Order (affiliate link) so it will be there when I get home! We walked back through the Rio Turia, the evening cooled off super nice, and K played for a bit in the park. We then headed back and grabbed ice cream sandwiches from WACIS! On Tuesday nights they are 1 EUR but only for students but still cheap at 1.5 EUR for us. They even have frozen yogurt sweetened with stevia and gluten free cookies. Didn’t feel bad about letting K have a lick of stevia sweetened frozen yogurt even if it was chocolate! Thanks California for rubbing off on Valencia, Spain with stevia. It’s hard to find around here with azucar everywhere!  🙂 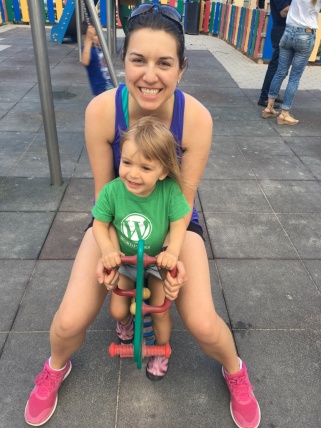 Riding the Horse in the Park
Wednesday after work I picked up chicken for lunch from a local place that makes rotisserie chickens. We’ve had this once per week while we have been here. Since we don’t have  crockpot or easy way to slow cook it, it’s nice to be able to just grab one! It was super super hot that day again. But it cooled off enough to go to the park with K again. We also ended the week stocking up on a few snacks for our weekend trip to Barcelona. The students decided to go to Granada, Spain for their free weekend. As much as I would have loved to see Southern, Spain, a 6 hour drive with K was not something we wanted to do. Since Ashley hasn’t been to Barcelona and there are some nice places along the coast to stop, we decided to head that way. We went to Barcelona in 2012, but only for about  5 hours on our 3 week EuroTrip. Stayed tuned for Barcelona fun!