We headed to Nashville, TN for our first family trip as a family for 4! It actually is the longest road trip we’ve taken with big Sis too. Our good friends Bethany and Josh live about 2 hours from Nashville in Jackson, TN. Bethany and I met in Pharmacy School and were sisters in Kappa Phi together. It is sort of crazy but their two girls are exactly 3 years and 10 days apart just like our kids! Theirs have birthdays in December so they are each about 3 months older.
We stayed at Opryland Resort & Convention Center courtesy to Marriott Rewards Points. It’s like a little city on inside that you really don’t have to leave if you didn’t want to! I was super thankful for being a Silver Elite member when I walked in and the lobby was packed to the brim with conference attendees trying to check in. I had the double stroller and two kiddos, and a few bags while dad was parking. It was a bit overwhelming but I quickly found someone who directed me to the Elite Check-in and all was good…we walked into a empty suite area with a lady who got us checked in very quickly! #perks!

She was so excited to be at the hotel! 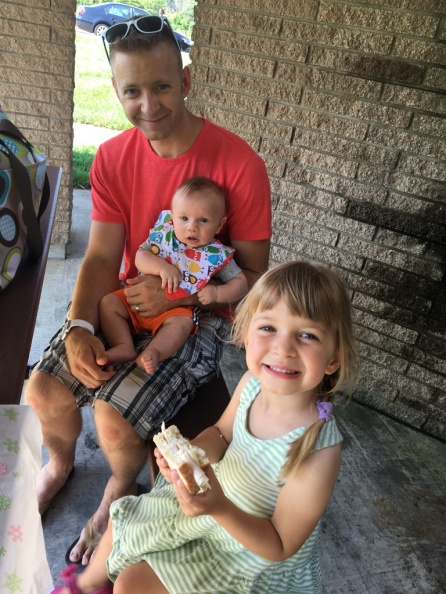 Southern BBQ for Dinner
Friday afternoon we went to the pool for a bit and then grabbed a quick dinner at the nearby Mission BBQ in the mall next door. It was actually pretty walkable because most of the walk would have been indoors through the hotel but we didn’t figure that out until we got there. Its as similar to City BBQ but definitely seemed to taste better!
We got back, put the kiddos to sleep and actually both of us slept pretty early too. Saturday morning Dustin got up to work at 4 am, and I was up with the kids around 6:15 CST. They were up a little early with the time change. 🙂
Our breakfast was from Five Daughters Bakery, which was recommended to us by a friend I went to high school with that lives in Nashville, they had Paleo Doughnuts! However funny story is Dustin tried to order the Paleo ones and apparently the employee didn’t hear “Paleo” for each and ended up with a Paleo one and 3 gluten filled ones. But we both commented how we felt completely fine after the normal doughnuts because of their clean ingredients. 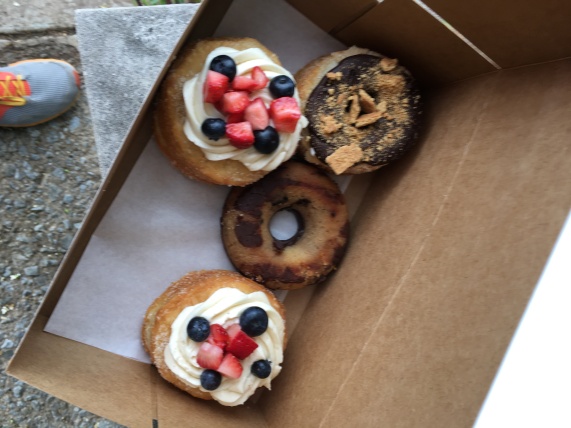 Our friends met us at the pool for early swim around 9am. The girls had a blast playing in the pool together. They were wore out before lunch. We had to get the hungry girls some food. K doesn’t normally naps these day but because she was up early we knew she would probably take one this day and the swimming wore them out. For that reason we stayed at the hotel for lunch and had some gluten free pizza. 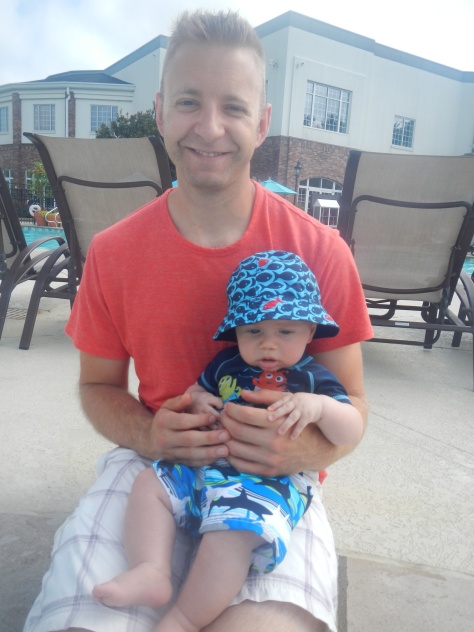 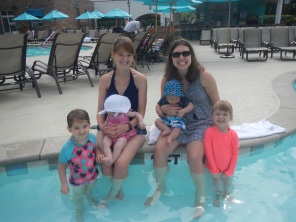 The hotel had an Alice in Wonderland theme going on this summer, so the girls ran into Alice and the Mad Hatter on the “street” inside the hotel.  The Mad Hatter was making ballon animals. They had a build-a-bear station/store set up. So the girls made matching Princess Bears. Both have gotten lots of love in the past few days! 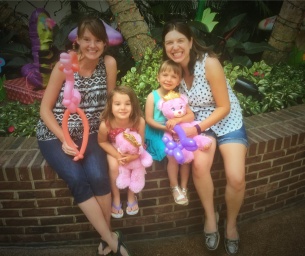 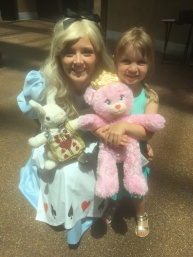 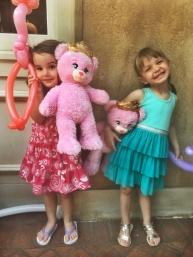 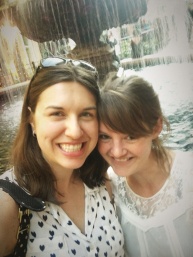 After naps for all kids, we headed to The Pharmacy restaurant for dinner. It had a lot of good reviews and where else should two pharmacists take their families for dinner?!  It was a really fun experience, despite the crazy heat, their patio was very well shaded so we were able to enjoy our meal without sweating. K ate more food in one sitting than she has ever at at restaurant ha! Swimming really does take it out of you. 🙂 The only thing that could have made it better would have been gluten free bun options. Dustin enjoyed his burger bunless on lettuce and still said it was great. 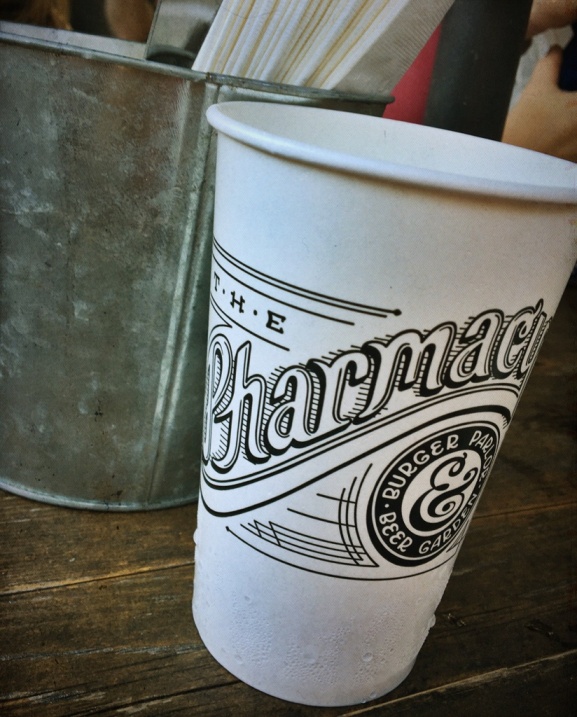 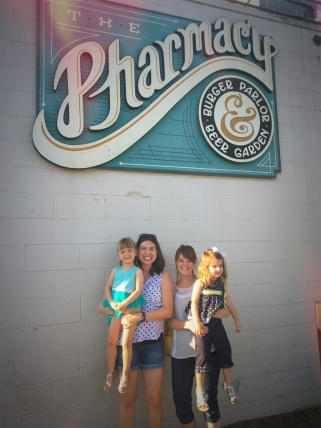 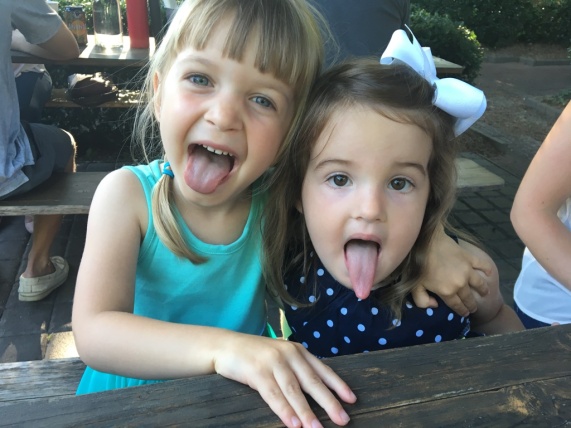 We finished the day walking around the hotel a bit before we headed back to our room for bed. It really is like a Las Vegas hotel but better because there is no smoke smell to deal with. Sunday morning I headed to the gym, then we took K to the indoor pool since it was open at 7am and our friends met us there. The girls swam again and Dustin and I got our room packed up and ready to go home.
We headed to brunch for one last meal before we hit the road. There were so many great options to choose from, but unfortunately we didn’t have time to wait in line somewhere and we didn’t make reservations soon enough for a lot of the East Nashville places. So we ended up going with Edley’s. It was another BBQ place that had breakfast burritos, and some other southern yummy things. I had the Chicken and Biscuits (another gluten bomb before heading home!) I’m semi- regretting that the last several days with some increase in stomach pain. Hopefully getting back on my cleaner diet it will resolve. All the food was yummy, K wasn’t so sure about the french toast, I think she just didn’t like the taste of maple syrup. It was more like bread pudding (again gluten bomb ha!) but amazing.

We made it back home in about 6 hours and Princess K slept 1 hour, and Prince K slept 4! He is such a good traveler so far. We are planning to drive to DC in the fall because our good friends Rebecca and Glen are living there for the Cedarville Fall Semester and Glen is teaching there. So that drive will be longer but we’ll have an extra day so that will be good! If we happen to find crazy cheap flights we might go that route, but we’ll see! I’d say the first family road trip was a success! So much fun to hang out with our friends.

One thought on “Nashville Weekend Trip! ”