Since I like to travel and I can work from anywhere that there is an internet connection, I was excited to join Melody on her trip. A few weeks before our trip, I found out that I have a co-worker that lives in Madrid!

We chatted a few times before we left and Javi was able to find two extra desks at his friends’ co-working space. It was basically an office about 30 minutes away (by walking) that had a solid internet connection and ergonomic desks.

Each day around 9:30am or 10am we would meet at the coworking place in Madrid. Javi and I are on different teams, so we did our own work once we got there. Around 1:30pm or 2pm we would break for lunch. They kept asking me if that was okay to eat lunch that late, since most Americans aren’t fans of eating late meals like the Europeans. When breakfast isn’t until 9am, I could certainly wait four hours for my next meal 🙂

During the mornings, I would watch the Cavs playoff games from the night before, as they started at 3am, Madrid time. I’d record the games on our DVR at home and would watch the game on my iPad, as I worked in the morning on the high speed wifi at the coworking place (yes, very geeky).

Lunches varied from Italian Calzones to Spanish Tortilla to Döner Kebab sandwiches to half of a roasted chicken. It was all delicious! We would get take out and bring all of the food back and eat at the large table in the space. The place also had a small kitchenette so a few of the guys made a fresh meal while there. We talked about the differences between Spain / Europe and the States and some of the cool things to do in Madrid, Toledo, and Valencia. Personally,I think they enjoyed working on their English, since my I only know a little of Spanish.

Depending on Melody’s conference schedule, I’d normally stay there until 5-6pm and then walk back to the hotel. It was definitely weird wrapping up my day when my coworkers were just starting theirs, since there is a six hour time difference.

On Friday, I decided to explore the city a bit and went on a Sandeman’s Walking Tour. These are free tours that are held in large city’s across the world. The guides know an incredible amount of history of their city and they deliver the 2.5-3 hour tour for free. They do work off tips, though 🙂

During my tour, I saw:

We also learn about the Kings of Spain and how Tapas originated. If you are ever in a large European city, I highly recommend checking out to see if they have a tour available. My guide did an amazing job of telling the story of Madrid which made the statues, monuments and other buildings much more interesting. Here are a few pictures from the day: 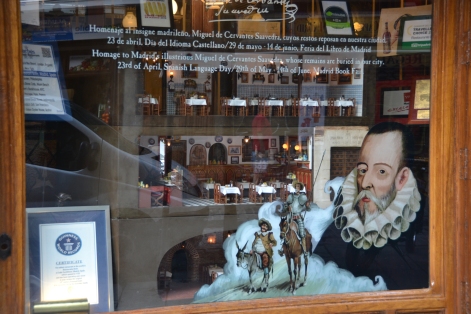 Window of the oldest restaurant in the world 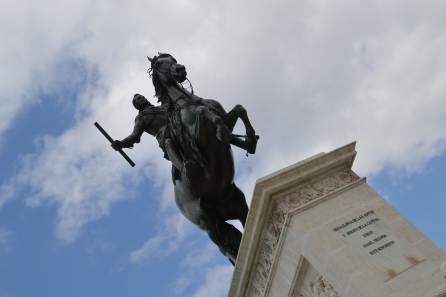 One of the kings of Spain

Some evenings, Melody had activities as part of her conference, so I caught up on some of my personal project on my computer or walked around the city to explore / grab dinner. And of course, one of the evenings I had to take a tour of my favorite store, the Apple Store in Madrid. It was neat because the Apple Watch wasn’t for sale in Spain yet, so the Apple Genius’ were asking me about mine 🙂

One night when walking home from work, I decided to stop and get a bit more cash since we were running low. Our bank had a much lower fee to get money out of the ATM than using an exchange service. I saw an ATM and stopped and put my card in and after a few minutes, I realized that the machine had eaten my card! I couldn’t get any money out, nor could I get my card back.

The bank was closed already so I wasn’t able to get it back. I knew that Melody had a card that worked, so I was okay with leaving it there and going back to the hotel to cancel the card. Thru amazing technology (Google Voice on my computer), I was able to talk to a representative at our bank and she promptly cancelled the card. Whew!

View all posts by Dustin Hartzler